One in three users reported daily or near-daily consumption, close to triple what it was in the early 1990’s.

Interesting article in the Washington Post on findings from a very large survey of cannabis users. It illustrates some clear trends that we can use in planning for the future.

More people are using on a daily basis.

Important to treatment folks because daily use  translates to increased risk of a DSM5 cannabis use disorder. One in three users reported daily or near-daily consumption, close to triple what it was in the early 1990’s. Those users account for about 70% of consumption.

The risk of arrest had already declined by about 50%.

The study ended in 2013, so legalization in Colorado and Washington had yet to arrive. The trend to decriminalize had already begun, and no doubt will continue. By the way, although total arrests are down, nonwhites still do get arrested more frequently.

Users trend towards the lower end of the education and economic scales.

The price of street pot in most areas was dropping throughout the decade. As the study notes, that suggests greater numbers of poor and less educated persons spending a larger percentage of their income on cannabis, and needing to seek treatment in the future. Which in turn suggests a much greater need for public-funded treatment services in the coming years.

A subpopulation of heavier users appears likely to dominate the treatment picture in future. DSM5 separates substance use disorders into 3 levels, based on number of symptoms: mild, moderate, and severe. We could anticipate that roughly 5-7% will fall into the severe group, which doesn’t sound like a lot until you consider exactly how many folks will be smoking cannabis by then– many of them every day.

I heard from one counselor in a methadone OTP in Washington, who complained about the difficulty of working with clients who arrive for sessions stoned on pot. “It sucks, big-time”, was the verdict. Being loaded does not encourage insight. But we see something comparable in other states, where opiate or polydrug clients arrive in treatment already on regimens of medical marijuana. You can advise them not to smoke up before sessions, but good luck enforcing that.

I suppose the treatment field will adjust, one way or another. What other choice is there? 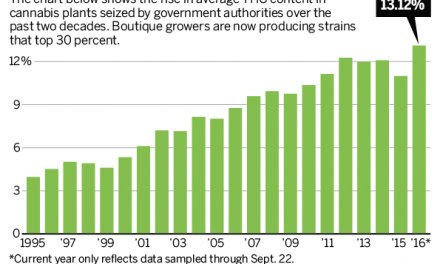