Another Day, Another Opioid Lawsuit

Meanwhile , the healthcare field continues to struggle with legitimate issues around the use of (and controls over) opioids in medical practice.

Plenty of media attention as this one goes to trial, since it pits the State of Oklahoma against the vast resources of Johnson & Johnson ( hereafter J&J). You’ll find articles about it in many news outlets. I chose the Guardian because it doesn’t have a paywall.

Most of the current wave of lawsuits have focused on Purdue Pharma, maker of Oxycontin. Just the other day four more plaintiffs joined that effort — Hawaii, Maine, the District of Columbia and finally the Big Dog, California, bringing the total to 48.

What’s so fascinating about the Oklahoma suit? A few features:

One thing for sure: something appears to have been off-kilter about the way chronic pain was treated in Oklahoma. During the three year period 2015-18– when the hue and cry over opioid prescribing was at its peak– some 18 million opioid prescriptions were written in a state with a total population under four million.

Can that be accurate? I’m sure some at least a few Oklahomans got by without painkillers. I doubt that every physician felt the need to write four-plus opioid scripts for every patient seen. So who did prescribe all those opioids? Who, ultimately, received them? Maybe we’ll find out.

Moving on: The next story concerns the demise, at long last, of a prime mover in the campaign to have pain declared the “fifth vital sign.” I’m talking about The American Pain Society (APS), a supposedly independent advocacy group that has turned out to be a surrogate for its funders in the world of Big Pharma. It was a campaign that actually left physicians vulnerable to ethical complaints if they “failed” to meet the patient’s expectations for pain medication– even at dangerous levels.

In other words, doctors could theoretically get in trouble for not putting their patients at risk for overdose or addiction. Is that ridiculous or what? A recent Senate report characterized APS and others as mere “cheerleaders for opioids“.

By the way, the model of influence that APS helped to develop is still going strong. I was just reading about an anti-vaccination group whose name is suspiciously easy to confuse with those of leading mainstream physician groups that advocate in favor of vaccination. Hard to believe that isn’t intended to confuse.

Meanwhile , the healthcare field continues to struggle with legitimate issues around the use of (and controls over) opioids in medical practice. I expect this will continue for a good long time — as it should, because the situation is complex. Hopefully that will be without further interference from commercial interests like Big Pharma and the pseudo-“independent” advocacy groups they promote.

I’m not counting on it, however. 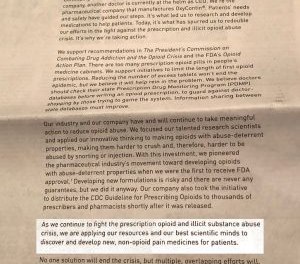 In the News: Stoned Driving