By the way, if you were wondering whether the issue will be co-opted into the ongoing partisan political debate, the answer is: oh, hell yes. 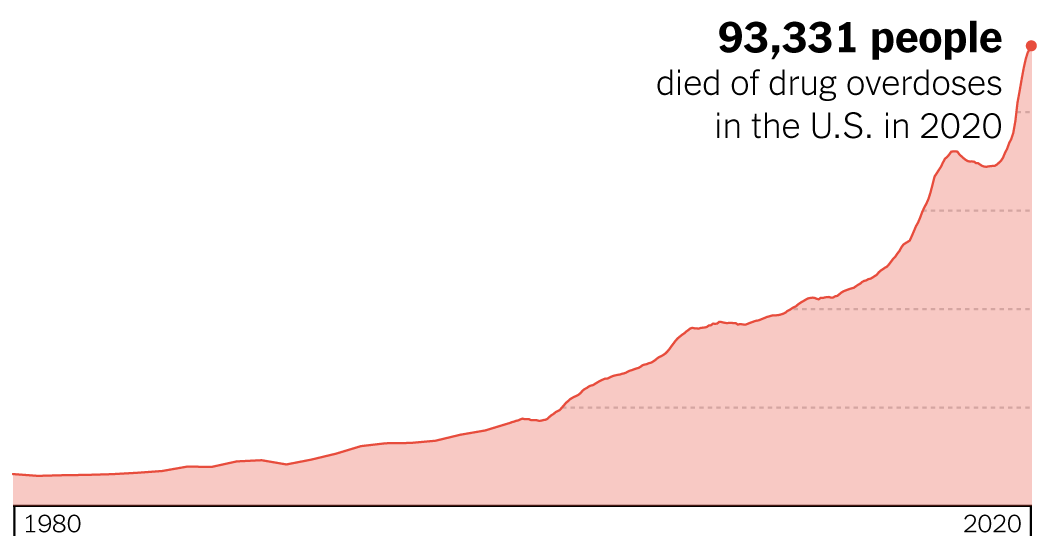 I happened to run into someone who does street outreach to opioid users in our area — goes out on emergency calls with the EMT’s, helps with crisis intervention, case management, etc — it’s real ground-level contact. He was clear that matters on that front had worsened significantly in recent months. For the most part, however, he hadn’t seen that shift reflected in the media.

I imagine the explanation is relatively simple: it’s the result of being the second worst epidemic in America. Our limited powers of concentration are absorbed by  COVID.

I don’t see that ending anytime soon. Not given the advent of Delta and low vaccination rates. But here are a couple articles on drug-related issues that you might have overlooked.

Prior to the pandemic, you may recall, drug deaths had actually been trending downward. They’d only recently begun to rise again when our attention was diverted by COVID. Since then:

I’m sure you already know that fentanyl, a powerful synthetic opioid introduced for cancer treatment, has become the illicit opioid of choice in many communities, replacing heroin. It’s found on its own as well in combination with other substances. And acquired a variety of street names along the way. One of the more curious examples: fuf. Don’t ask me how to pronounce that.

Many experts compare these changes to the arrival of the Delta variant and its effect on COVID relief efforts.  Hopefully that will spur governments, Federal, State, and local, to take a more active role, now and in future.

That would be a welcome change from what one commentator described as “our longstanding practice of making a little progress, accepting praise for it, and then forgetting all about the problem until the next crisis hits the headlines.” Cynical, sure. But we’ve been there before.

By the way, if you were wondering whether the drug issue will be show up in the various political campaigns to come, the answer to that is: oh, hell yes.

For instance, one legislator’s confused reaction to a massive drug bust at the border.

“Under Joe Biden, enough fentanyl to kill 238 million Americans was seized at the southern border last month. Where’s the outrage in the media?” That was from Rep. Andy Biggs (R-Arizone).

The response from many readers: “Wait, isn’t that a good thing?” and “Shouldn’t we be congratulating law enforcement?”

Or as they said in The Princess Bride: “I do not think that means what you think it means,” Congressman.

Teens: Cannabis and Vaping Up; Cigarettes Down