The firm’s managers conclude that sales would be a whole lot better if the disorder were better publicized and more people were diagnosed with it. 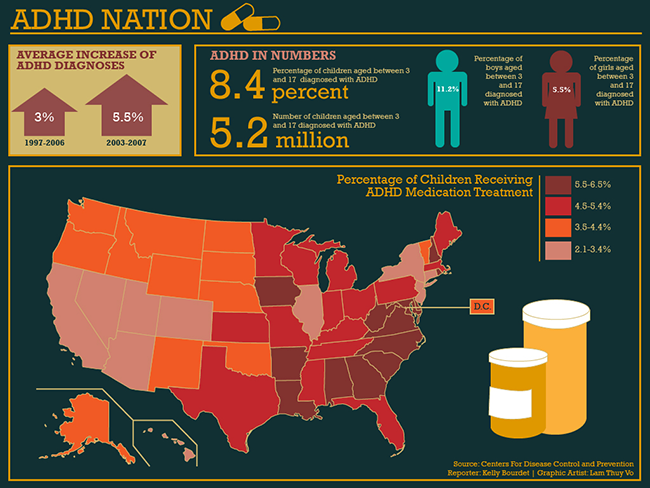 A review of a new book on ADHD:

ADHD NATION: Children, Doctors, Big Pharma, and the Making of an American Epidemic

It’s a familiar story— pharmacy firm with a drug to sell stumbles on a little-known disorder where the drug may be of use. But the firm’s managers conclude that sales would be a whole lot better if the disorder were better publicized and more people were diagnosed with it. Accordingly, they launch a massive PR and marketing campaign to popularize the diagnosis— not coincidentally, with their product as the preferred (or perhaps only) treatment.

In this instance, the disorder was ADHD and the drug was benzedrine.

It worked better than they hoped. Although by the mid-’80s, methylphenidate (Ritalin) had supplanted benzedrine, and become even more popular. Now there’s Adderall (amphetamine/dextroamphetamine).

Aggressive marketing changed the world of Big Pharma forever. Nowadays, the vast majority of large firms spend more on marketing than R&D (in some cases, almost double). That annoys the public, but from a purely business perspective, it’s common sense— companies that market heavily get a far better return on the initial investment.

About the diagnosis: nobody disputes the existence of a syndrome that fits the profile of ADHD, but many clinicians do worry that it’s over-diagnosed. On the other hand, some studies suggest that there are far more kids out there who could be diagnosed with ADHD but have yet to be identified. Ironically, both can be true. That’s because the symptoms of ADHD may be overly inclusive.

Those symptoms fall into two clusters: inattention, and hyperactivity/ impulsiveness. Examples from the attention group:

Examples of the second (hyperactivity/impulsiveness) type:

As often happens in mental health, there’s no lab test to separate those who actually have the disorder from those who simply appear to suffer from it. A complication: With young people, much of the observation and reporting to the doctor is by anxious parents or frustrated educators. That suggests a genuine problem with confirmation bias.

Even that wouldn’t be so controversial except for the almost automatic use of stimulants, including with the very young. That “squicks” some of us, both clinicians and the public. In practice, it has turned ADHD treatment in many areas into medication-driven rather than medication-assisted treatment. Other options and supports can fall by the wayside, once the medication is on board.

A quick story: Some years back, I visited an elementary school in a rural area of the Mid-Atlantic and was surprised to learn from the staff that maybe 25-30% of their first and second grade students were already on Ritalin. “What, something in the water?” I blurted, amazed. Turned out the source was a local GP who wrote the scripts in response to pleas from worried parents. No mental health professional was consulted. No real psych assessment, counseling, or follow-up.

So I wasn’t particularly startled when, a year or two after that, I encountered a case where a 14 year old patient in a residential center was caught (along with his dad) snorting crushed-up Ritalin in the bathroom on Visiting Day.

When you open a pipeline into the general population for an abusable drug, with little monitoring and few controls, this sort of thing is often the result.