They understand the clock is ticking as customers snap it up at stores and online. I expect many hope to get rich before the clock runs down. 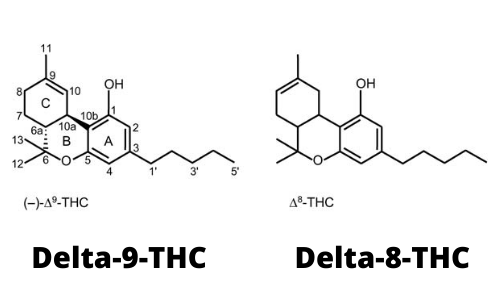 Everyone knows about Delta 9 THC, the active cannabinoid in marijuana that gets people high. But have you heard about its next-door neighbor, Delta 8?

For an update, here’s something from The New York Times:

This Drug Gets You High, and Is Legal (Maybe) Across the Country

“The rise of Delta 8 is a case study in how industrious cannabis entrepreneurs are pulling apart hemp and marijuana to create myriad new product lines with different marketing angles.”

Please note the emphasis on sales and marketing. Everybody’s hunting for new products to steal market share from the competition– which at this point, appears to be everywhere. They’re focused on a wide range of “potencies, flavors and strains of THC, the intoxicating substance in cannabis.” Note the implied emphasis on intoxication as the principal selling point. D8 may not be quite as potent as its close relative D9, but it does produce a high referred to as “marijuana light”. Best of all, it appears to be legal. For the moment, at least.

It’s probably not a surprise that many of the entrepreneurs pushing D8-powered products are in states like Texas and Georgia that have strict laws against marijuana use. Except those laws, and the Federal law (2018) that governs hemp production, are specific to Delta 9 THC and do not address Delta 8, or Delta 10, or any other potentially saleable intoxicants that may be extractable from cannabis.

It’s a hole big enough to drive a semi-trailer through, and vendors are lining up to join the parade. Mostly what they offer is hemp sprayed with concentrated D8 liquid. If some Delta 9 has somehow managed to sneak in as well, is that the maker’s fault? Their attorneys argue it is not. Besides, labs may not yet be equipped to analyze such preparations. So how can anyone be certain it isn’t exactly what we claim?

In a way, it’s part of the longstanding tradition of evasion of drug laws based on simple failure to include all the right name for the chemical in the text of the Federal law. I first became aware of this with respect to synthetics, mostly hallucinogens, that were technically legal until they had been identified, analyzed, judged to be potentially harmful, and formally declared controlled substances. That took a while, especially when traffickers were intent on keeping it hidden. Their products arrived from China and elsewhere by mail, and were quickly resold to waiting customers. While the DEA was trying to find the current drug and complete the legal process, outlaw chemists were busy inventing new synthetics to exploit the next loophole.

It was a time-limited opportunity to rake in additional revenue. That’s what some US-based hemp entrepreneurs are attempting to do with D8. They’re not keeping it secret, however. They understand the clock is ticking as customers snap it up at stores and buy online. I expect many hope to get rich before the clock runs out. Or  perhaps they’ll have moved on to D10. Diversifying the old product line, that’s all.

On a related issue: I know that small business is the bedrock of our economic system, but in my experience, such operations are often not very well managed, with respect to quality, finances, and even safety. Sloppy might be another term for it. An example that has some helpful background on what can go wrong:

My rule is to assume that accidents and other consequences result from ignorance or incompetence rather than actual malice, but the prosecution appears to disagree in this instance. They’ve gone ahead and charged the entrepreneur with felony arson. That’s probably based on this having occurred before, involving the same owner, also with a bad outcome.