You mean Prohibition wasn’t all bad?

…it’s foolish to expect an industry built around making, distributing, and selling (for immense profit) abusable substances to regulate themselves. 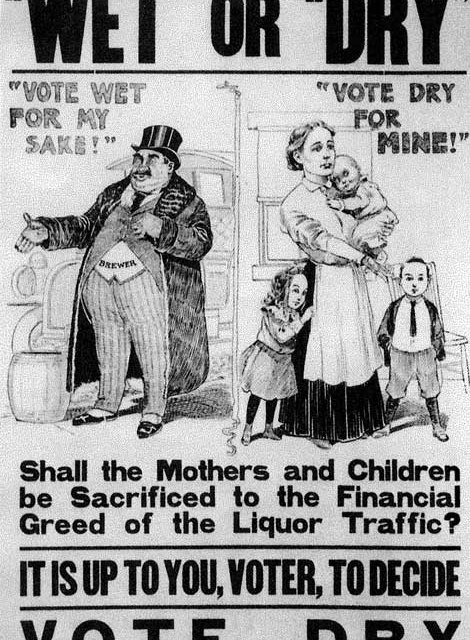 At least, that’s the conclusion drawn by the author of a newly published work on the subject. Here’s an article:

Maybe Prohibitionists Were the Good Guys

Who’d have guessed it? But the book apparently makes some interesting observations, such as:

Solid links existed between the Temperance movement and other progressive social movements of the time, including women’s suffrage and the pursuit of racial equality. Proponents of the 18th Amendment saw themselves as freeing America from the tyranny of liquor and those who distributed it. Advocates from minority populations supported the new law because, then as now, they suffered disproportionately from damage done by alcohol abuse. And there was plenty of that.

I’m no historian, but the author makes a convincing case for the Temperance marchers as idealistic reformers, rather than the humorless Puritans portrayed in the media.

Anyway, if that’s the case, why did Prohibition fail? As far as I can determine, several factors played a role.

First, drinking was already firmly embedded in the United States. People were accustomed to free access to booze, and unwilling to give that up. They did support the idea that drinking too much and too often was a bad thing. But to ask them to do without altogether? That was seen as a government overreach.

Second, no one seems to have been prepared for the explosion in organized crime that followed. The criminal justice system simply wasn’t ready for the challenges of enforcement. It makes me think of struggles involved in enforcing all the strict new laws that emerged during the War on Drugs. The barn doors had already been removed in that respect, the horses long since fled.

And then there was greed. Suddenly people were making a lot of money providing and selling booze, including the outlaw variety, to the rest of us. More under Prohibition than before, in fact. No way they would give up that cash without a fight. Bribing officials, threatening opponents, a few gun battles in the street? As far as they were concerned, it was simply the cost of doing business. Pablo Escobar would have been proud.

Here’s an interesting thought experiment: what would America be like today if Prohibition had worked? People would still drink, of course. Liquor has been strictly forbidden for generations in many Islamic societies, yet there are still plenty of opportunities to procure and consume liquor in Arab countries. Likewise, we’d still have to deal with the many health problems related to alcohol. Perhaps fewer and less severe than we endure today, however.

So what are the lessons for today’s policymakers from the experiment that was Prohibition? I can identify three that appeal to me.

Anyway, sounds like an interesting book. Check your local library.