High CBD content reduces the potency of the THC in cannabis. 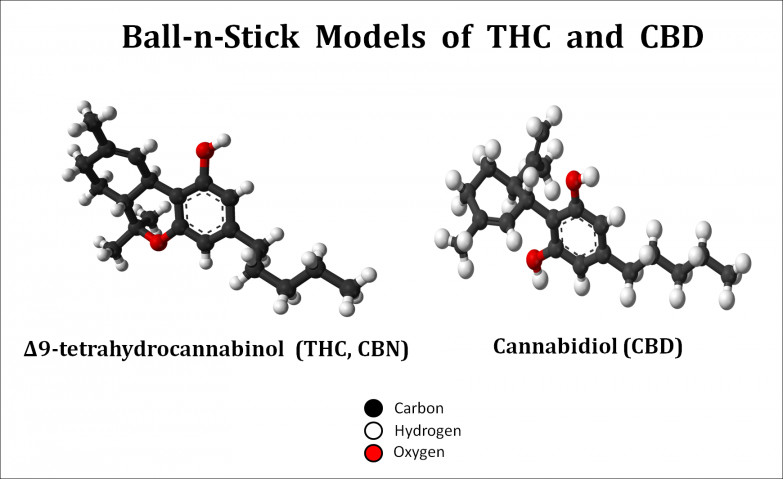 Just to clarify something that comes up in discussions of medical marijuana:

First, we should probably switch from the word marijuana, Spanish slang for intoxicant, to the more correct “cannabis.” And learn to think of cannabis in terms of its two most important (for our purposes) cannabinoids (active compounds): THC (tetrahydrocannabinol) and CBD (cannabidiol).

CBD is actually the more prevalent of the two in most samples. It’s also the one that gets credit for most of the genuine medical benefits. It is not the one that gets you high, because it’s non-psychoactive. That’s the contribution of THC (delta-9).

It’s fair to say that THC is mostly about intoxication, while CBD is about the other benefits of cannabis.

For instance, where THC is the source of the anxiety or even paranoia experienced by some users, CBD appears to suppress those symptoms. On the other hand, THC seems to induce a feeling of sleepiness, while CBD promotes a wakeful state. THC may worsen the symptoms of psychosis, while CBD is being considered as a possible treatment for schizophrenia.

Cannabis’ benefits in terms of pain relief are due to CBD. The euphoriant effects that make it eternally popular as a drug of abuse are all about THC content.

Here’s a bit of irony: High CBD content seems to reduce the potency of the THC in cannabis. That’s why chemists are racing to create forms of cannabis that are high in THC and low in CBD– the better to get loaded. That of course is not the goal of medical treatment.

It’s likely that in most cases, the real medical use of cannabis will be from CBD, in pill or liquid form.

From my perspective, it seems reasonable to support the use of CBD as a treatment for medical problems where its value has been clearly established. I’m not as sure about the value of THC-heavy variety.

I can certainly see uses for that, but most of them wouldn’t qualify as ‘medical’.