It’s hard to accept that what began in an effort to help people in pain has turned into this unholy mess. 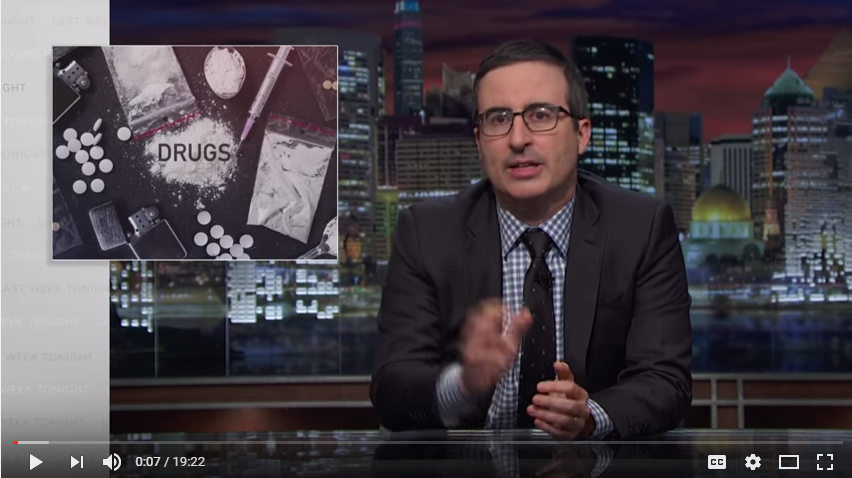 For those who missed it, comedian John Oliver pokes Big Pharma for its role  in our opioid problems:

It’s not as funny as his usual fare because, well, there’s not that much to laugh about when it comes to the opioid epidemic. I believe he’s correct that Big Pharma seems far more interested in protecting the bottom line than in the welfare of those who use their products.

But it would be naive of us to think otherwise. Corporations often profess high-minded values when the money is flooding in, only to revert back to profit when the cash begins to slow. They have investors to satisfy, after all, and that can lead to some remarkably short-term thinking on the part of corporate executives. After things improve a bit– say, the company figures out a way to squeeze more cash from its product line– there’s time then to reacquaint ourselves with those nobler values. Until the next shortfall comes, that is.

It may help to remember that huge pharmaceutical fortunes are built on just a few drugs. Reckitt’s future in pharma (the conglomerate also sells condoms and cleaning products) may live and die with Suboxone. Purdue needs Oxycontin. Big Pharma is a gambler’s business, and if you’re a CEO looking to hedge the bet, you’re likely to grab on to a money-maker and hold tight.

Some of the ‘innovations’ used to justify continued patent (and price) protection resemble a redesigned mousetrap that makes 40% less noise as it snaps shut– not such a big improvement, perhaps, but enough to argue for special privileges that keep the gravy train chugging.

Don’t forget that in many cases, a third of the development costs for such drugs came courtesy of the taxpayers. That’s a heck of an advantage for an industry that figures to hang on to most or all the profits from the product. There’s growing sentiment in favor of recouping that investment for the public– especially in view of recent cases of capricious overcharging.

We’d all like to think that this is just a few “bad apples” spoiling the bunch, but the current system actually encourages this sort of weasel-like behavior. As Trump complained when criticized for avoiding his taxes: If we didn’t want him to do it, why didn’t we stop him?

It’s hard to accept that what began in an effort to help people in pain has turned into this unholy mess. But a psychiatrist friend recently turned me on to this quote from Eric Hoffer, the longshoreman-philosopher:   “Every great cause begins as a movement, becomes a business, and eventually degenerates into a racket.”

Tell me about it.