Recently empty tanks labeled N2O have begun turning up in the debris left by revelers at some events. 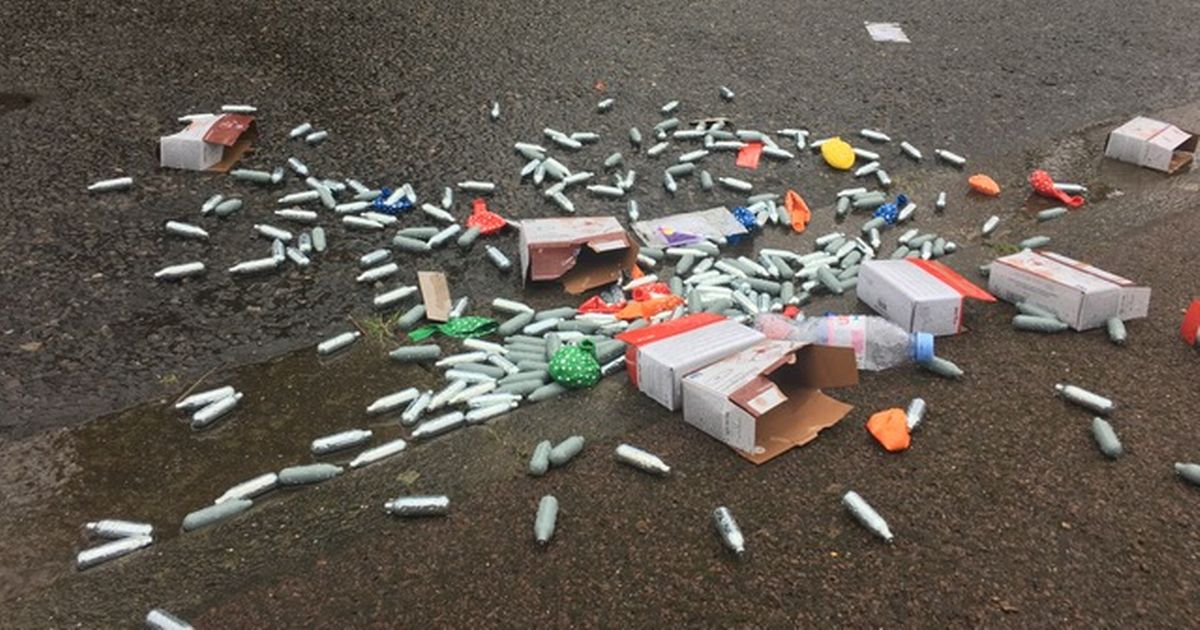 Nos is just one current slang term for nitrous oxide (N2O). Others include nangs, nitro, buzz bomb, etc. Nitrous oxide has been around since the late 18th Century, believe it or not. It now appears to be experiencing one of its periodic rebirths as a popular drug of abuse, in the US and around the world.

You may recall an incident a couple of years ago, where the CEO of a successful online retailer died of smoke inhalation during a fire at someone’s home. Nitrous Oxide abuse is thought to have played a role in his death. From The New York Times, hopefully not behind a paywall:

Several containers of nitrous oxide gas were found near the victim. It seems he’d been a longtime user, which surprised me because nitrous isn’t a drug ordinarily associated with middle-aged men. Outside of the occasional dentist misusing his equipment, that is.

Mostly it’s thought of as a drug favored by teens and young adults, found at concerts, ‘raves’, festivals. Its popularity is due to the fact that it’s cheap, widely available, and offers the user a very intense ‘rush’ that conveniently wears off in a few minutes. “No muss, no fuss, and leaves no traces,” reported one user.

That’s comparable to ‘poppers’, those amyl nitrite capsuled used by clubgoers in very much the same way. Amyl nitrite is actually an angina medicine, helpful in relieving symptoms of an attack. Both drugs are further proof that medicines can and often do escape the confines of medical practice to contribute to problems elsewhere in society.

I don’t know why this comes as a surprise to the public. As they say on the streets, “if something can be done, it will be done.” Only a matter of time.

It’s odd to think how many of the drugs that plague us today began life in somebody’s laboratory, as promising treatments for serious disorders. Problem is, they didn’t stay there.

For some reason, amyl nitrite is considered an inhalant but N2O isn’t. Both are inhaled, after all. The usual method for using N2O is to purchase a commercially available ‘charger’, fill a balloon with it, then inhale the gas as you release it. If you’re too busy to fiddle around with that, you can just open your mouth wide and breathe it in.

The chargers I mentioned are typically silver or blue metal, small enough to fit into your palm, and sometimes called “whippets”. They’re available as propellants for aerosol devices, to deliver products such as whipped cream. Some states have enacted laws against sale to those under 18, for all the good that does. Most of the Noz users I’ve encountered in treatment settings have been underage, so obviously, they’ve found a way around the restriction.

DSM5 has a special category for Inhalant Use Disorders, which again includes amyl nitrite but not nitrous oxide. N2O shows up instead under Other Substance Use Disorders. The symptoms will be familiar to addiction specialists, except for the absence of physical dependence. Even without withdrawal symptoms, many users find themselves returning to the drug again and again, in spite of the consequences that emerge.

Would you believe this is now one of the ten most abused drugs in the world? I suppose I can see why. With teens, there’s also ‘peer pressure’, that oft-cited force rooted in the adolescent’s overpowering urge to belong, to some group, any group, if it makes one feel less alone.

Now for the downside: N2O has been shown to erode the myelin sheath that coats nerves, which can lead to permanent nerve damage. That’s mostly related to longer-term, heavier exposure. N2O is also a very effective sedative and relaxant. Deep intoxication is akin to being really, really drunk. Stuporous drunk, in some cases.

Many years ago I actually experienced the power of N2O by accident, during oral surgery. There must have something wrong with the tank or the flow valve, because I found myself with a weird buzzing sensation all through my body. Felt kind of nice at first, but that didn’t last. That buzzing feeling grew increasingly uncomfortable as the minutes passed. I attempted to alert the people working in my mouth but could neither speak nor move – at all. Complete paralysis. I was wondering what the heck to do when my autonomic nervous system made the decision for me: I threw up lunch. That got their attention, believe me.

No real damage done. I’ve had N2O since with no difficulties at all. Still, it left an impression on me.

I don’t share that story with rehab patients because I just know somebody will be thinking, “Oh man, I gotta try that!”

Recently, empty tanks labeled N2O have begun turning up in the debris left by revelers at some events. My guess would be that some junior entrepreneur smuggled them in to sell ‘hits’ of the gas to other patrons, for a profit.