Compare it to the corner dealer arguing that if he didn’t supply his customers, someone else would. Worse, they might be less scrupulous than he is. 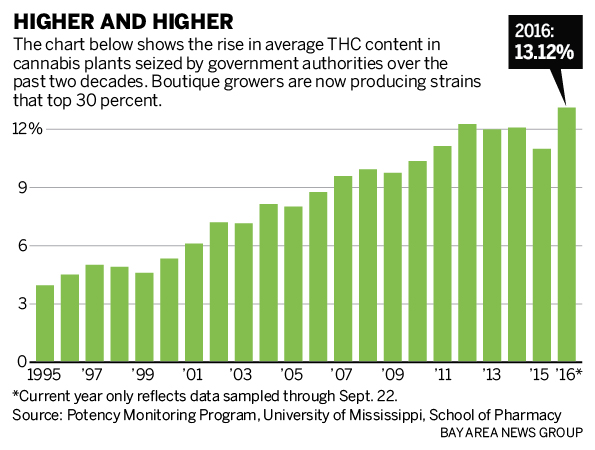 How much THC is in the products sold in your neighborhood cannabis store?

Good question. We probably don’t know. What we do know is that THC content seems to be climbing, fast.

I’ve seen the subject discussed among treatment professionals, but rarely in the popular media. That puzzled me. Things may be changing, however.

The Cannabis Industry’s Next War: How Strong Should Its Weed Be?

I’ve been aware of the all-out campaign by industry researchers to increase THC content ever since a psychiatrist friend reported on a conference presentation by a noted pharmacologist. Analyzing samples, the expert claimed, made it clear that while ads may emphasize the healing powers of CBD, the real focus of industry chemists was on increasing THC.

Why? Among regular or heavy users, such as daily consumers, it’s likely the THC that really matters. Their elevated tolerance means that not only can they consume more, they need more to get the same effect they once got from lesser doses. And because many are physically dependent, they now experience withdrawal symptoms when blood levels fall too far, too fast — an even greater incentive to increase cannabis consumption.

From a purely business standpoint, that makes those heavy users an essential part of industry revenue. “Casual use just doesn’t cut it, volume-wise,” explained one entrepreneur.

It reminded me of the outsize influence on casino revenues by a small number of truly big-money card players, known informally as ‘whales’. These heavy bettors account for a disproportionate share of a casino’s profit margin.Also true for the ten percent or so of US drinkers who account for much of the liquor industry’s annual takings.

Thus the impetus for finding new ways to boost THC content. Sometimes to a scary extent.

In response, some experts have promoted the idea of setting a “hard” cap –a fixed upper limit– on THC in a commercial product. An example: 10% for so-called “flower” products, but 60% for oils, waxes, etc. The notion seems to have found favor among public health professionals, but met stiff opposition from the commercial cannabis industry.

“A total nonstarter,” was how one industry source described it.

Their argument: a cap would send heavy users to the black market where they’d be easy prey for unethical sellers hawking contaminated goods. Some might even try extracting THC themselves, using butane, at home in the garage. Boom.

Ergo, they insist, they must continue to produce super-potent cannabis. It’s to protect their customers, not exploit them. In other words, we’re the good guys here.

It’s a a classic lesser-of-two-evils rationalization, of a kind we’ve all heard from corner dealers who argue that if they didn’t supply the demand, somebody else would — and who knows? the next guy might be even less scrupulous than they are.

Big Cannabis (Big Weed?) argues that the best way to manage things is by sticking with the current regulatory structure. Think alcohol and tobacco.

Which makes little sense to me. 95,000 alcohol-related deaths last year, a half- million credited to tobacco? It could be worse, sure. But if that’s success, I’d hate to see failure.

Regulating addictive substance use is quite difficult. Highly motivated consumers (and now, the legitimate businesses that sell to them) excel at finding ways around regulations and regulators. A hard cap on THC content represents a ceiling. It’s still possible to find ways to circumvent it, but easier to track.