Posted by C. Scott McMillin | Feb 3, 2014 | Addiction, Thinking About Addiction | 0 |
Related to addiction and the brain

One characteristic of Delta FosB is its unusual stability. It’s capable of persisting in the brain for a very long time. 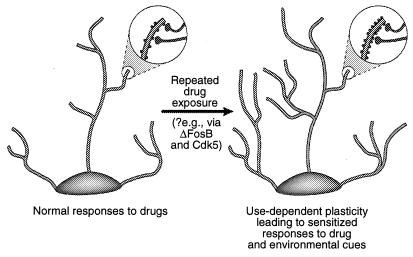 Our brains must adapt to the presence of a drug in order to experience phenomena we normally associate with addiction: tolerance, withdrawal symptoms, compulsion, loss of control. And not just for a short period, either. The behaviors associated with addiction are so persistent as to be considered permanent.

It’s what neuroscientists call a transcription factor, a protein whose role is to bind to specific DNA sequences and use them to control the flow of gene information. We’re all born with a set of genetic material (the genome), but the way it’s manifested is heavily influenced by transcription factors. They help control how and when and where genetic messages are expressed.

Delta FosB has been found to accumulate in two brain areas ordinarily associated with addiction: the nucleus accumbens and the dorsal striatum. This represents an adaptation to continuing drug use. The adaptation can occur slowly, over time, in response to long-term use, or fairly rapidly.

One characteristic of Delta FosB is its unusual stability. It’s capable of persisting in the brain for a very long time. That implies a cumulative impact that could affect gene activity long after drug use itself has stopped. Which could help explain one of the mysteries of addiction: Why relapse continues to be a real danger even to those who’ve abstained for many years.

Delta FosB and another transcription factor, CREB, have also been implicated in the development of so-called ‘process addictions’ involving gambling, overeating, exercise, etc. The theory is that certain repetitive behaviors are also capable of “throwing the switch” on the addictive process.

We’re a long way from fully understanding this process and even farther from translating the knowledge into an effective treatment. But it’s one direction that seems worth a look.

In the News: Do Safe Injection Sites Work?