And we don’t want to discover that we’ve inadvertently incentivized cheating. 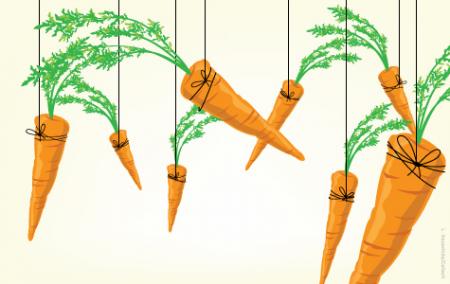 Yes, they do. Well, sometimes they don’t. It depends.

Incentive programs are common in the world of behavioral health. For employees, they’re used in the hope of boosting admissions or revenue or profit margins. In treatment, they’re sometimes used to motivate behavior change or to encourage folks to show up as scheduled for therapy sessions.

There are risks attached. For instance, monetary incentives such as bonuses can actually diminish employee performance if they’re not used correctly. In some cases, they can become seriously counter-productive, actually damaging an organization’s reputation and credibility with the customers. A horror story from the world of banking:

Performance incentives can also be divisive if they create unhealthy competition within the workforce– as when marketing or admissions staff argue over credit for a referral, or team members find themselves reluctant to share helpful information with a colleague who they now see as competition.

Then there’s the issue of targets.

Whenever we set a performance goal, we normally attach a numerical target, a number or percent, so we can measure performance. That’s where we run into Goodhart’s Law.

In laymen’s language: “when a measure becomes a target, it ceases to be a good measure.” Because people– hopefully not all, but there will always be some– will begin to strategize ways to ‘game’ the incentive program.

And if we’re not careful, we may find we’ve inadvertently incentivized cheating.

An oft-cited example of Goodhart’s Law in action: the rat-catchers of Hanoi.

During the French occupation of Vietnam, the city government came up with an ingenious plan to hire poor townspeople to catch and then exterminate a growing plague of rats that bred in the city sewers. A paymaster would dole out cash for proof of kills — usually, freshly-cut rat tails, by the bundle. This seemed to work quite well, both as a public health strategy and a job creation program.

Gradually, however, the citizens began to notice that the rat population was once again on the rise.  Turned out that to keep their source of income growing, the catchers had trapping the rat, removing its tail, then releasing it back into the sewer to breed more rats, ensuring a steady supply of new pests whose tails could be harvested and taken to the paymaster to collect… well, you get the picture.

The field of behavioral economics has a body of research that we can draw on to improve incentive programs. Fact is, no incentive works forever. Over time, early success often erodes. The incentive can actually begin to exert a negative influence on performance.

The only remedy is to reevaluate incentive programs annually, revise and update them to ensure they’re still of value, and to see if they remain compliant with ethical practice. Of course, that means the organization must have a code of business ethics that addresses how their incentive programs are to operate. Many organizations do not.

That should be corrected without delay.

After all, there are human beings involved here. They’re not programmable robots.

Not yet, at least.

As always, a human service business is about relationships — between client and therapist, between marketing staff and referral source, business office and payer, organization and the larger community where it operates. These relationships are built on reciprocal trust.

It’s important that we not allow any wrongheaded effort to “improve things” to damage that trust. Once it’s lost, whatever the reason– game over.