We routinely received assurances from experts that abuse and addiction were not going to be a big problem once access to opioids had been greatly expanded. 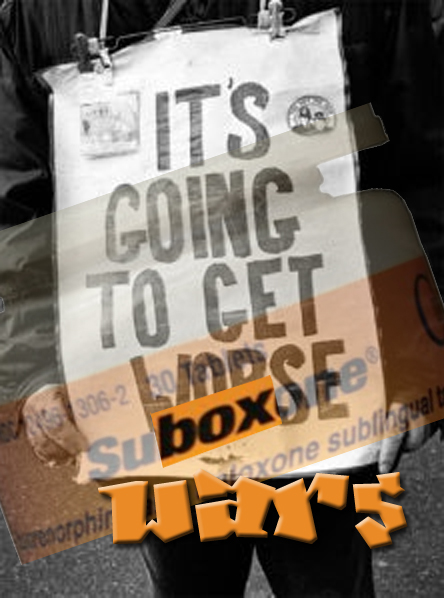 An article from the NY Times, introducing us to a new phenomenon: Box Wars. That’s a term for intense competition among sellers of black-market Suboxone.

The portrayal of Suboxone in the media has been quite favorable overall. But there have been articles in the past that suggest that its use as a treatment for addiction has not been problem-free. I’ve been surprised at how little discussion has followed. Perhaps this quote from the NYT article helps explain why:

‘Dr. Kolodny ranks anti-Suboxone judges like Judge Moore in a category with climate-change deniers and people who believe vaccines cause autism. “When there’s really dangerous heroin on the streets, I’d rather see Suboxone out there, even if it is being prescribed irresponsibly or is being sold by drug dealers,” he said.’

A fierce defense. But is the choice really between abuse of heroin and abuse of Suboxone? We have to live with one or the other? That’s the best we can do?

I confess I’m always suspicious of ‘lesser of two evils’ arguments. I mean, they’re still evils, aren’t they? I would prefer a solution that was not another evil.

Public health models, as valuable as they are, deal mostly in populations and statistical trends. Judges in courtrooms, like counselors in treatment programs, deal with human beings. They often wind up with different viewpoints.

It isn’t that one is wrong and the other right. In a practical sense, they’re both worth paying attention to.

Personally, I would like to avoid a repeat of the early days of the opioid epidemic. Back then, we routinely received assurances from experts that abuse and addiction were not going to be a big problem once access to opioids had been greatly expanded. That turned out to be, well, incorrect.

Many people in the addictions field saw that, way back when. But those voices didn’t carry.

It would be naive to think that couldn’t happen with Suboxone. After all, methadone wasn’t a factor in overdose when it was confined to regulated clinics. But once it was popularized for use in pill form for chronic pain, it became the number one factor in overdose in some states.

That’s it for now– have to run. By the way, not to Climate Deniers Anonymous, or the local Anti-Vaxx meeting. I’m in line with the expert consensus on those matters.

But there’s quite a bit of smoke around Suboxone.  We should probably check closer for fire.