The addiction potential was so high it was classified with the controlled substances, and it’s uncommon to find it outside the Arab world. 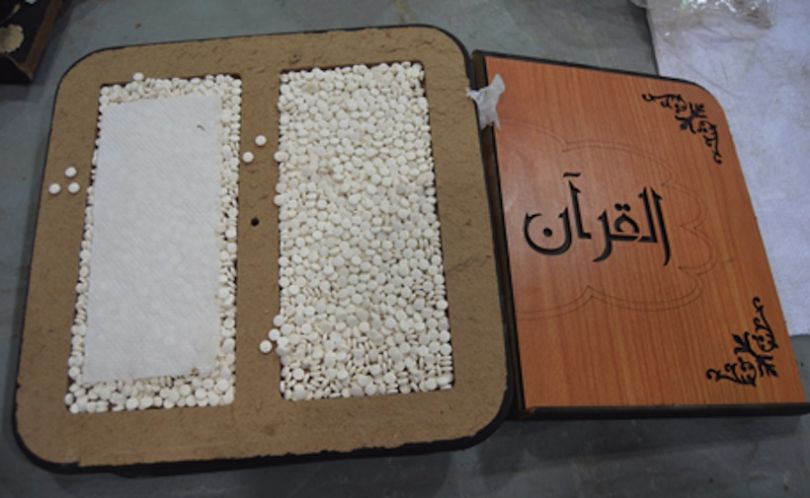 War and drug use have always gone hand in hand. Opium production in war zones like Vietnam and Afghanistan are just two examples. But the drugs most associated with combat are stimulants. WWII kamikaze pilots stoked up on amphetamines (whose name in Japanese meant ‘the drug to inspire fighting’) in order to bolster their courage during suicide missions. The US military has been another big user. Here’s an article on the subject from the noted psychopharmacologist Richard Friedman.

Today in the Arab world, the favored stimulant is fenethylline, a cathinone marketed under the brand name Captagon. It’s popular with ordinary citizens, but often shows up as well in the bloodstreams of terrorists. A typical suicide bomber may have been under the influence of days of heavy Captagon use. An opioid or sedative is often employed to lessen some of the nervous irritability associated with stimulants.

I know, I know– the tenets of Islamic fundamentalism strictly forbid such drugging. Maybe there’s some complex theological justification that I’m not aware of. Or maybe it’s the only way they could find enough recruits for certain self-destruction.

In the past five years, war-torn Syria, always a hospitable locale for drug trafficking, replaced Lebanon as the main source and distribution point for Captagon. Its use is widespread, especially in Saudi Arabia, Kuwait, and the United Arab Emirates. Because Captagon is ridiculously simple to manufacture, much of it is produced in makeshift home labs for resale on the black market. ‘Lookalikes’ are common, usually an amphetamine made to resemble the real thing.

Like so many of its type, Captagon was developed in the West for the treatment of depression and narcolepsy. The addiction potential was high enough that it was classified with the controlled substances. In recent years it’s been uncommon to find it outside the Arab world.

That could change, of course.